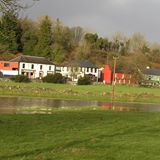 History
Belcarra Community Co-op is one of the oldest and most successful organisations in the area. Formed in 1975, it is now in its 38th year. The Group Water Scheme originally provided a water supply for 200 homes. It has now grown to supply almost 500 homes plus businesses and land. It is providing one of the cheapest supplies in the country.


Aims
Although the Co-op was originally formed to provide a water supply, its aims are to provide services and assistance to the community and to promote and develop Belcarra in every possible way. It has gone from strength to strength and, down through the years tourism, agriculture, employment, enterprise, environment and culture in the area have all been assisted.

Various committee members down through the years have contributed greatly to the success of the Co-op, giving generously of their talents.

Achievements
A piano and school of music for 50 students have been provided on a continuing basis since 1982.

An archaeological survey of the area was carried out in 1987/89 and a booklet on the findings published, a copy of which is available in Belcarra Community Centre and the County library.  In 1989 a video and booklet on the life of parishioner Fr John Blowick, founder of the Maynooth Missions to China, was produced.

Belcarra Houses for the Elderly (established in 1993)
Following a survey, by Belcarra Conference of the St Vincent de Paul, it was found that there was a large number of people living alone in isolated areas of the community. It was therefore decided to avail of the generous grants available for social housing by the Department of the Environment and with the co-operation of the Mayo County Council a scheme of four houses for the elderly was built opposite the church and all amenities. Two extra houses were built in recent years.

At the rear of the houses an overgrown unsightly area along the river bank was landscaped and a safe fishing area provided for young people. 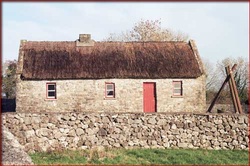 Belcarra Eviction Cottage (re-enactment of eviction in 2000)
On Sunday 9th July, 2000 members of the local community got together to re-enact the eviction scene. This was a very dramatic event and volunteers participated for the various roles of family, soldiers and neighbours. Copies of the eviction video can be purchased from any Committee Member.

Membership
Scope - All members receive a written invitation to the Annual General Meeting which is held in Belcarra Community Centre.

Find us on Google+